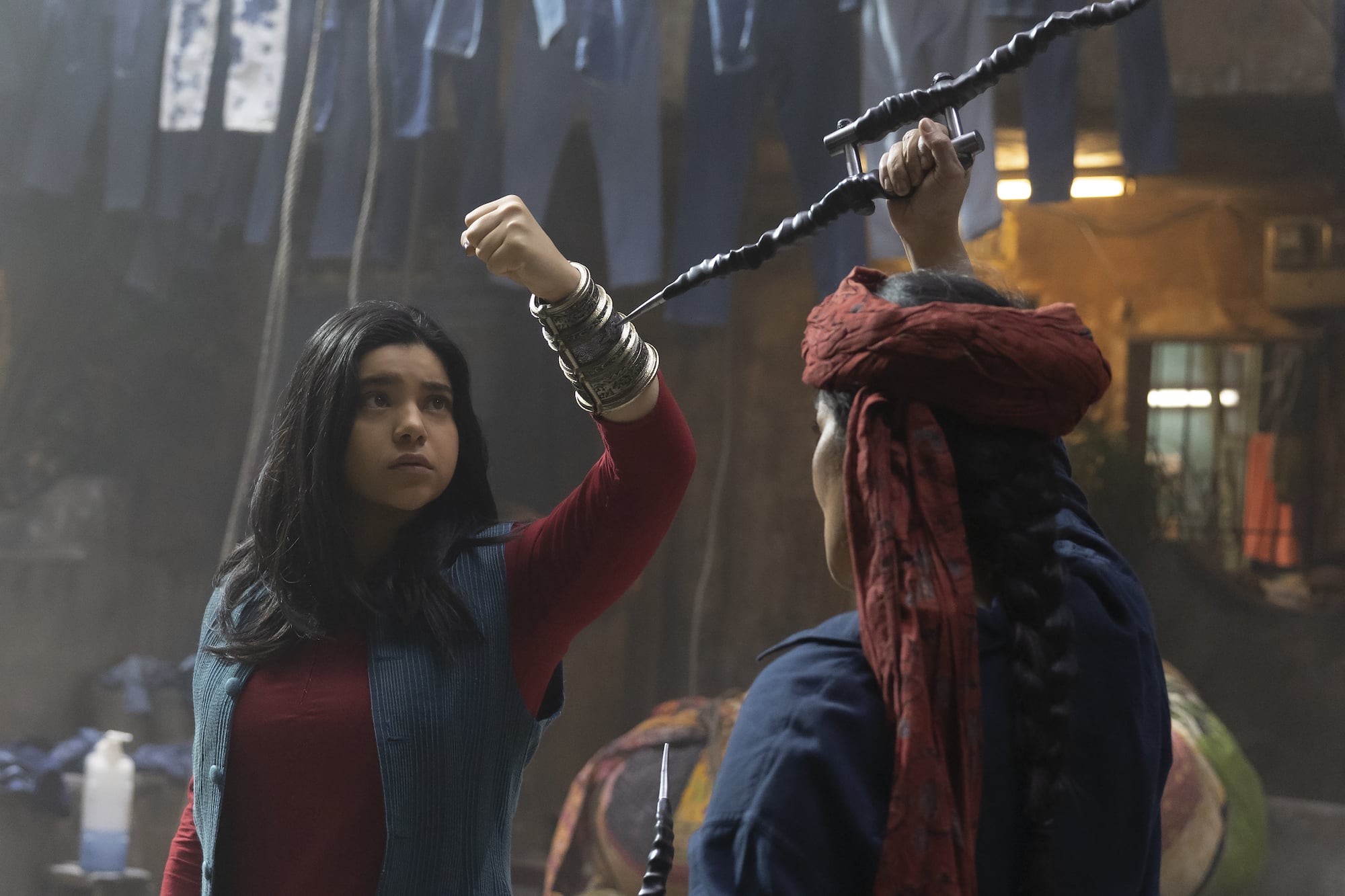 As Disney+ releases the six episodes of “Ms. Marvel” this summer, POPSUGAR has exclusive interviews with the cast and creators about making the show come to life. This week, production designer Natasha Gerasimova chats with POPSUGAR about episode five, “Time and Again.”

Natasha Gerasimova joined the “Ms. Marvel” team pretty late into the process. The show had already been filmed and edited, and the creative team was planning reshoots. Gerasimova tells POPSUGAR that when she came on board, there was a meeting of the minds to evaluate what needed to change to improve the show.

Gerasimova says the scope of the changes the show’s creative team wanted to implement was pretty massive, so they had to be strategic about what could be re-edited and what they actually needed to reshoot. “The reshoots were pretty massive, so there was quite a big script restructuring, and a lot of episodes were reshuffled, and a lot of new sets were added,” she said. “We got to build and create whole new sets during reshoots, which is not always the case.”

“It is very different from many other Marvel projects because it has this very reality, rooted feel to it.”

And that presented some major challenges, because all the scenes requiring new sets were focused in India and Pakistan. Initially, those scenes had been filmed on location in Thailand. But all the reshoots would be done in Atlanta during the winter. “Finding locations that would work, matching them to the existing locations that were already shot was incredibly challenging,” she says. “Think about matching the color of a building. We had to pick up one of the pieces that was shot in a backlot Thailand studio, and the buildings were already painted the color that they are. In order to match that color without having any information, it’s kind of a crapshoot.” Plus, the art team and set directors who worked on the shoot in Thailand weren’t involved in reshoots.

“The information that we were getting from Thailand was trickling in little by little, but it was definitely not an easy task to match stuff,” she says.

There were three big, brand-new sets Gerasimova was in charge of creating. One was the cave from episode three, where Aisha (Mehwish Hayat) and company find the bangles. The second was the Dhobi Ghat, the outdoor laundromat where the action takes place at the end of episode four and into episode five. The third was the train station where Kamala’s (Iman Vellani) great-grandfather Hasan (Fawad Khan) and her grandmother Sana (Zion Usman) fled India for Pakistan. Each presented its own unique challenge.

First, there was the cave. Gerasimova also worked on season one of “Loki,” and she says “Ms. Marvel” couldn’t have been more different. Loki’s aesthetic was retro sci-fi with a midcentury influence and super defined and heightened from day one. “Ms. Marvel”‘s aesthetic is rooted in reality, and it was important for the creative team that everything was culturally and historically accurate. “The cave was the hardest one because there’s nothing authentic about the cave because it’s a completely invented space,” Gerasimova explains. “But I tried my best to at least make it look like it is a real cave. We built that the fastest I have ever designed and built a set in my life.” It took the team just four weeks from concept to filming. The other important aspect of the cave set — which was crafted with foam rocks — was tying it into the greater MCU lore. A quick overhead shot of the cave reveals the markings of the 10 rings from “Shang-Chi and the Legend of the Ten Rings” on the ground. What this means for Kamala’s bangle and its connection to the greater MCU, viewers don’t yet know. 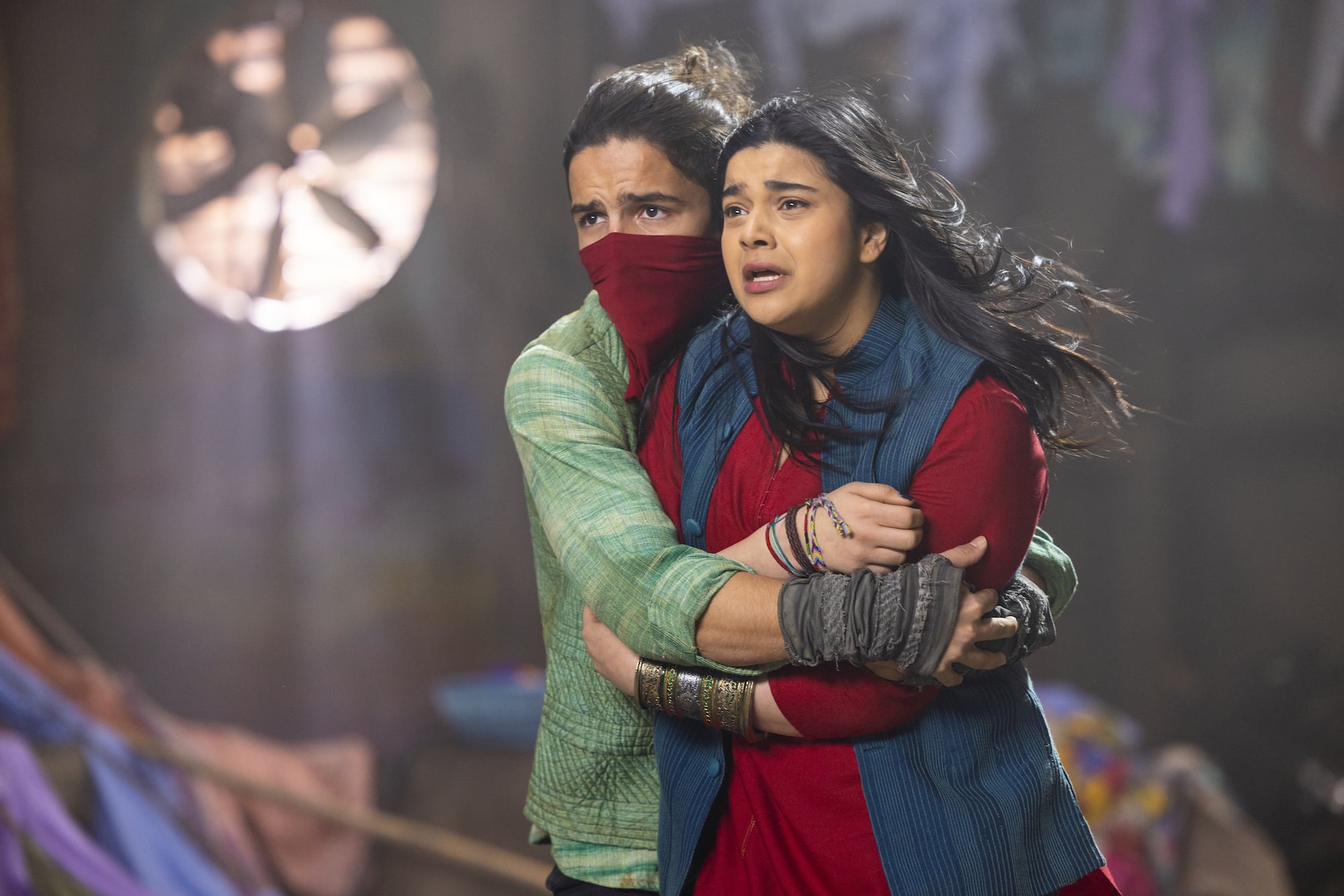 For the Dhobi Ghat, the large outdoor laundry space where Kamala and Kareem (Aramis Knight) end up fighting the Celestials, the creative team had lots of cultural examples from Pakistan and India. But nothing in Atlanta looked remotely like a real-life Dhobi Ghat. Plus, it was much too cold to shoot outside.

“It was a dilemma until I figured maybe we could start looking for a location that has an atrium, like an abandoned mall with a huge skylight,” Gerasimova explains. They ended up filming in a decommissioned mall. “We built this two-story courtyard, which was quite a lot of fun to do.” They based the design on a real Dhobi Ghat in Lahore, Pakistan. “We basically bought every single sari that was available in Atlanta,” she explains, using the piles of clothes to bring the fake laundry set to life.

Last came the train station. “That whole part, we built and modified in a train yard and a train museum in Atlanta,” Gerasimova explains. Again, they worried about it being cold; filming outside, everyone’s breath would be visible in the air. Pure luck was on their side: “The day that we were shooting was not that cold,” she says.

For Gerasimova, one of the most rewarding parts of the project was working with Sana Amanat, who created the character of Kamala and served as an executive producer, and the rest of the creative team, including director Sharmeen Obaid-Chinoy, who helmed episodes four and five.

“I just love the fact that [Amanat] was able to bring this freshness and authenticity to this piece. I feel that it is very different from many other Marvel projects because it has this very reality, rooted feel to it,” she says, adding that there was a real sense of collaboration on set. “Nothing like that has been done in Marvel Universe. That authenticity and the fact that Sana was that girl who grew up in Jersey City who’s into comics, it infused a whole different life into this process. She was very passionate about it. It definitely felt like she was giving it her whole heart. That was incredibly refreshing.”

Do You Have to Do Cardio? Cardio Benefits and How Much to Do

Hang out with Snuggly Alpacas for a Great Cause in Rochester, NH