Wie West, now 32, married Golden State Warriors executive Jonnie West in 2019, and the couple has a daughter who was born a year later. In the years before and after becoming a mother, she played a half-dozen LPGA Tour events each season, most recently competing in January at the Hilton Grand Vacations Tournament of Champions. Wie West had considered retirement but decided to keep playing in part to use the platform to advance social causes.

On her introduction to Tonal . . .

I got gifted a Tonal, and it was perfect at the time because I was moving from Florida to San Francisco. I was part of a gym there, I worked out [with] my trainer for many years and, moving to a new city, I didn’t have a trainer. The Tonal machine was like a gift sent from heaven. I was like, ‘Oh my god, it’s amazing.’

I never really liked strength training because I’ve been injured before at a gym using weights. So I avoided it for a really long time. I only exclusively [used] bands for the last couple years. So using the Tonal machine was the first time I actually used weight, and it was amazing. I’ve never felt so safe in my life. The feature where you can turn the weights on and off was just a game changer for me. Because when I was in a position—let’s say I was doing an overhead shoulder press and was like, ‘Oh, this doesn’t feel great’—I can turn it off at the top and can train really safely.

So I started to get back into weight training, which was really great for me. And then I told my agent, ‘Please get me in contact with the people at Tonal. I would love to talk to them about investing and creating a golf program for them.’ Since then, we’ve been talking about it, and it’s been really fun to see it come to light. 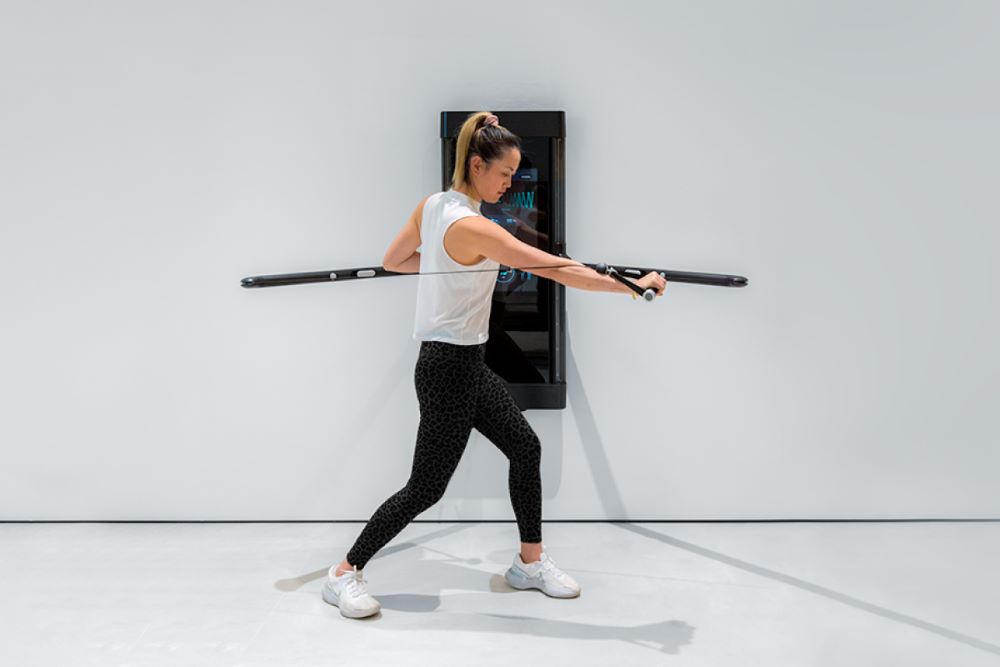 On developing a golf program . . .

These are workouts I’ve done for years. I know from experience that, if you do these and if you do our warmup exercises before you go on the golf course, you’ll run into less risk of getting injured, or you’ll gain more distance. So yeah, we just had a lot of calls, banking on a lot of my experience and training in the past. It was a lot of fun to come up with these exercises.

Using the Tonal machine was the first time I actually used weight, and it was amazing. I’ve never felt so safe in my life.

On what she seeks in an investment . . .

First and foremost, for me, I have to like the product. And, secondly, the team. That’s been really great to get to know all the people that work for Tonal, from the higher ups to everyone else that works there and the coaches that are on the screen. It’s just been really fun to get to know everyone and get to know the culture of the company. And I think that’s really important.

On investing in Sportsbox AI . . .

It’s a very smart AI, and it just helps to give that smart AI to a lot more people. Especially with 3D technology. Before, only the top echelon or really rich people were able to utilize the 3D technology because, for instructors, it was really expensive for them to get. So in order to pay for a lesson that has that 3D information, it was so expensive only a few people were able to use that.

On applying biomechanics in her own pro golf career . . .

It was something that I incorporated, but at the same time, I didn’t really use it as much as I wanted to because, A, it was really annoying to put the dots on or, B, put a vest on. And only certain instructors had it, so you could never go out to the range yourself and be able to use it. So I felt like the information is great, but I was only able to do it maybe two or three times a year. At that point, it just kind of became useless because, what good is it going to do for me to do this just twice a year? That’s what’s so great about Sportsbox is that it allows you to consistently look at your 3D numbers.

On whether she ever used a biometric-tracking wearable like Whoop or Oura . . . No, I didn’t. I was kind of scared to get on that train because I didn’t want to see myself wake up in the red every day. I felt like those can be demoralizing.

20 Years Later – Have We Forgotten The Positive Lessons of 9/11?

Intrinsic capacity and its associations with incident dependence and mortality in 10/66 Dementia Research Group studies in Latin America, India, and China: A population-based...

How golfers embraced fitness training and ‘learned to love’ the gym

Exercise your way to better health