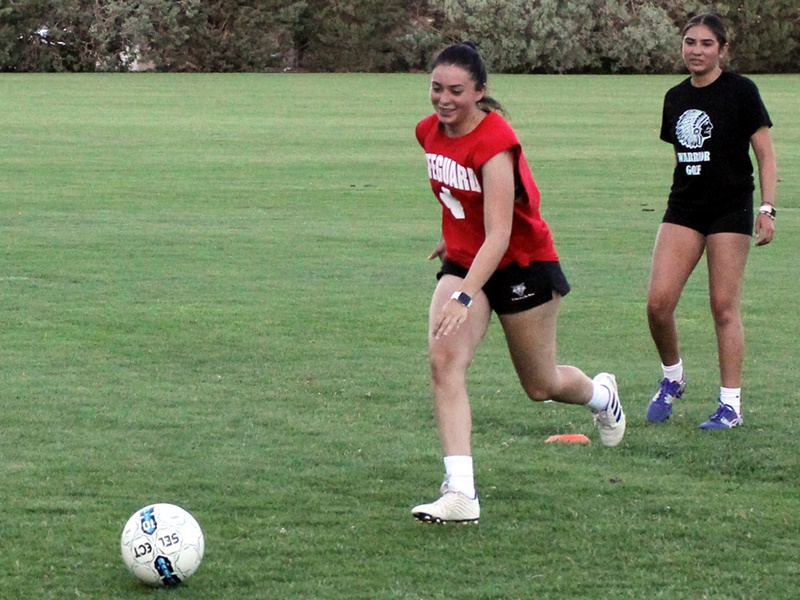 After saying goodbye to 11 seniors, the team is working hard to prepare for a new season.
Juan Baeza | El Defensor Chieftain photos

The Lady Warriors are back in summer training. After a season where two graduating seniors received collegiate scholarships, head coach Amanda Saenz is working on getting a younger group of girls prepared for to compete. The Lady Warriors are doing field work and hitting the weight room.

“We had 11 graduating seniors so recovering from that is tough. We had some incredible talent this past season. We were solid all around, but I think this young group is already showing so much promise. Just their work ethic alone is great,” Saenz said.

The practices they are cur­rently implementing are not man­datory, but the girls are showing up to put in the work. 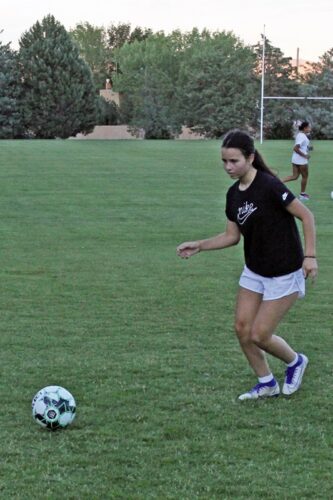 The Lady Warriors are back in summer training.

“So far this group of girls have shown us that they want to be better and competitive this year,” Saenz said.

The weight room is something she implemented last season after a tough loss in the state champi­onship against St. Mikes.

“It was something new that I wanted to develop and grow in our program. I’ve had five girls that are consistently showing up. The weight room is not only helping them boost their physical confi­dence but is also helping them mentally.” Saenz said this is a new culture that they want to develop.

The high school offers weight training classes, but she says the players might not take them as seriously if the coach hasn’t built a culture around it.

“Being present and showing them that they are going to do this and take it seriously, then that’s when you see them buy in,” she said. “Then you see more female athletes going to work out here at Tech because maybe their times don’t line up with ours, but you are seeing a culture shift here in Socorro.”

As far as what Saenz expects from this upcoming season, chemistry is the first thing that comes to mind.

“I just want them to build that chemistry with each other. Of course, we want to win district and compete in the state tourna­ment. I want them to be successful athletes, but I also want them to be role models for Socorro,” she said.

Alana Romero and Faith Lucero are two seniors who have the most experience returning to the team. Knowing they have a young team, they plan to encour­age others and keep spirits high on the team.

“I don’t really have expecta­tions right now; I just want to see the younger girls come out of their shells and speak up. I just want our chemistry to grow,” Romero said.

“For us as the older players, we show them how to become one team and not find yourself break­ing into groups. So, it starts with the older players just by getting along, talking to everyone and bonding together,” Lucero said.

The Lady Warriors soccer team will kick off their season Aug. 19, in the Socorro Cup Tournament.

LeBron James Could Miss The All-Star Game With Knee Injury