OUT OF SIGHT, out of mind.

Well, to an extent.

Roma McLaughlin will never forget the feeling of her first call-up under Vera Pauw this time last year.

Enjoying a rich vein of form Stateside with Central Connecticut State University [CCSU], she earned a return to the Republic of Ireland set-up for the first time since 2018.

“I remember the feeling,” she tells reporters from the Irish training base in Antalya, Turkey ahead of Monday’s World Cup qualifier away to Georgia.

“It was kind of a bit of relief to think… not that they remember me, but I’m still in the mix or I can go in and prove myself now again. I’m grateful for that, and I’m really happy to be here, start a game and get 90 minutes under my belt.”

The Donegal midfielder certainly impressed in her first start of Pauw’s reign on Sunday, a 1-0 friendly win over the Philippines. Her stats go some way in telling the story.

Impressive performance by @RomaMcLaughlin in narrow win over Philippines 👍

McLaughlin, who now has eight caps to her name after her second senior start, is more than happy to share her own from the past few years.

She won’t shy away from the fact that playing in the US collegiate system may have held her back to an extent, often keeping her out of the international conversation.

“I do think so, yeah,” the 24-year-old nods. “I think it was two, three years where I wasn’t called in, and in the back of your mind you’re questioning whether you will be called in or if your chance will come again. Fortunately enough, I proved myself to get back into the squad. For that, I’m very happy.”

Having graduated from CCSU, where she studied Exercise Science for four years and starred for the Blue Devils, McLaughlin is now plotting her next move.

She’s playing for Connecticut Fusion as she does so, and there’s now an option to return to CCSU to undertake a Masters in Physical Education and Exercise Science; strength and conditioning and PE teaching among the wide variety of career paths she could pursue thereafter.

“I’ve got an opportunity to start my Masters and potentially play another season with the Blue Devils,” she explains. “At the minute, just to keep my fitness levels up, to make sure I’m getting my training and game time, I’m playing on the summer team.

“Playing with the Fusion before coming here has definitely helped me in a way that I’m prepared. If I go back to America, I’ll be playing with the Blue Devils for another season.”

So, the dilemma right now — an important one for her international future, it appears — is to stay in the States or return to Europe?

“It gives me either option. I’m open to doing anything once I finish my studies. I’m open to going anywhere if I’m honest.

“I’m still weighing up my options to see what will work out best for me in the long term. If I was to stay there, we would start pre-season in August, and I would get a lot of games under my belt so it would be a good game rhythm for me.

“While I was in America, I got a call-up and I’ve been in here for a year now so I hope Vera knows what I can do and what I am capable of. But yeah, I think somewhat making a move closer to home might benefit me more in the long run.” 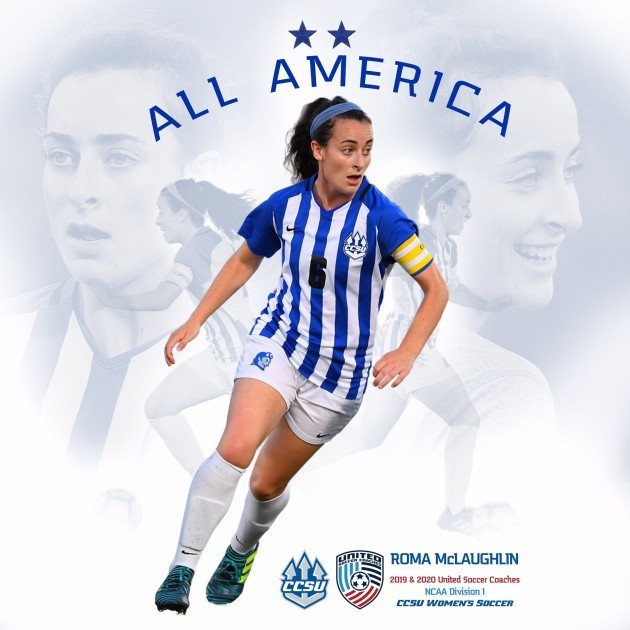 And when must the decision be made? “Very soon,” she smirks, having turned to Ireland team-mates for advice with respective future plans always a hot topic of conversation.

Any idea? “Not very sure. I think in the football world you have to be willing to make your last-minute decisions and figure out what’s best for you. Once you’re in camp, you try forget about all of that outside of camp and focus on what’s important now.”

McLaughlin was sprung from the bench in November’s record-breaking 11-0 win over the group’s minnows in Tallaght, and is hoping to also feature in the reverse fixture in Gori, for which she anticipates “a whole different ball game” and urges to “expect the unexpected”.

She’s surely given Pauw plenty of food for thought in recent days, despite the sizeable step back up to international level.

“I’ll take a lot of confidence from that performance [against Philippines]. I thought I played quite well.

“The intensity level is much higher than playing with your Blue Devils team or over in America for me. But leading up to this camp, I played quite a few intense games in the heat that definitely helped me,” she adds, also bridging the gap by training with the Greencastle senior men’s team when on home soil.

While away — and out of sight — she always keeps a close eye. 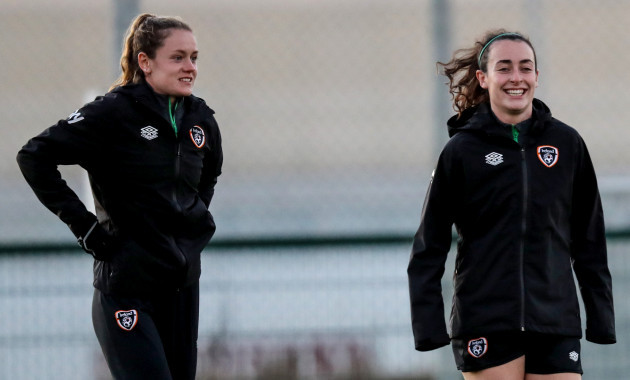 Even in April when she was absent for the monumental 1-1 draw away to Sweden.

With serious momentum behind the group, now reflected in their jump up Fifa’s world rankings to 27th last week, this unquestionably is the team’s strongest point through McLaughlin’s involvement thus far.

“I really do think so,” she enthuses. “The last game against Sweden, I missed out on the camp but I was in America watching the game. I was so proud. I almost felt like I was there playing with them, in every move. I was so happy.

Another big difference? “There’s a real feeling of togetherness. Everybody is in it with each other, and we know what we want to do. And we know how we’ve got to work get there.”

While fully focused on the Georgians and rolling out all of the ‘one game at a time’ clichés like all her other team-mates, McLaughlin assures there’s a real confidence in the group that they can qualify for a first-ever major tournament in the 2023 World Cup.

“There is a strong belief that we can get there,” she concludes.

“It would just be amazing. It would just show everyone’s hard work behind the scenes – girls in previous years have helped to get here. For everyone, the staff included, it would be probably the one of the highlights.”

What is Apetamin? The “hourglass figure” drug that medical experts are warning against

Our fitness expert weighs in on exercises and products for arthritis pain relief – WPRI.com