How they train: Jess Piasecki

“The marathon is a weird one,” says Jess Piasecki, who moved to number two on the British all-time list following her 2:22:25 performance at the Seville Marathon in January. “You’ve just got to be comfortable at being uncomfortable.”

It’s a complex status quo, but the 31-year-old is increasingly experienced at negotiating the frighteningly fine line between success and failure. Her performances in recent months – including personal bests over 10 miles (51:50), 10km (31:19) and half marathon (67:20), in addition to the marathon – are evidence of a programme that works.

Piasecki completed her PhD in 2018 and works part-time as a researcher and lecturer in exercise physiology within the sport science department at Nottingham Trent University.

“I’ve considered going full-time (as an athlete), but I’m not sure I’d like it,” says the Derbyshire-based Stockport Harrier. “I quite like the balance and having a little bit of something else going on.”

With the flexibility her job affords her, Piasecki – guided by Robert Hawkins since 2017 –opted for a change of scene ahead of Seville and based herself in Spain to prepare.

“Prior to this year I hadn’t really done that a lot, but I knew I was going to be training through January and February which is generally pretty rubbish weather for running fast, marathon-type long efforts, so I decided to try Spain,” says the Tokyo Olympian whose place on the British team for the World Championships in Oregon was confirmed in March. 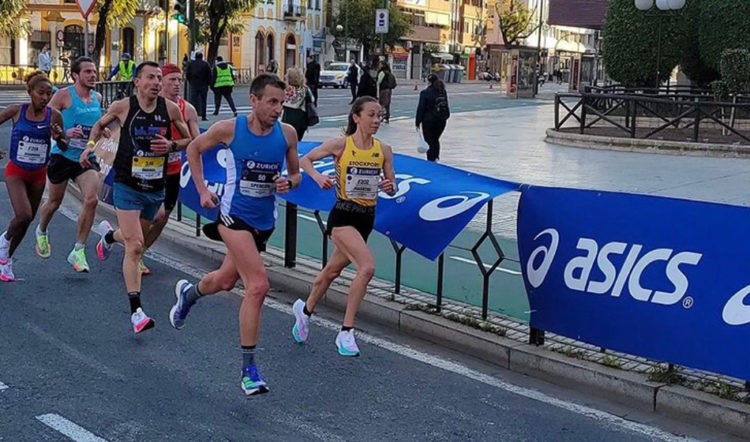 “We went with an open mind, but it turned out there was a perfect canal there and some really nice routes, so I stayed for eight weeks and worked while I was away. During that time Rob and Derek [Hawkins] came out, so I was able to spend quite a lot of time with them and Rob could see me training.

“Running was my priority, but I was able to sleep more, I wasn’t commuting to work, I could have my breakfast before running – all those little bits and bobs in between you probably neglect when you’re rushing around, I was able to implement those, and I do think that was all part of the jigsaw that came together in Seville.”

With the support of Birmingham Talent Hub, Piasecki complements her training with regular physiotherapy and strength and conditioning.

Not much will change in her preparation for this summer’s Eugene showpiece. “The staple marathon training tends to stay the same,” she says.

“There are sessions we might do more of – for example progression runs and maybe more 10km type stuff, because in a championship it can often be a slower 30km then a rapid 10km, so you have to be in very good 10km shape as well. If I can build on what I did last October (31:19 PB at Leeds Abbey Dash), then I can go into it knowing I’ve done those kinds of races and that would be a good place.”

“Probably a long run with some effort, or even just a long run if I’m not doing marathon training.”

“Definitely a recovery run, I’m rubbish at running slowly. You think it’s only short, but they seem to
last forever.”

Piasecki, a former European under-23 cross-country champion, ran in excess of 90 miles per week in the build-up to Seville and peaked in the low 100s.

Her key sessions during marathon training are Thursday and Sunday runs which incorporate marathon-pace miles and enable her to practice race-day fuelling. During those workouts her husband Mathew or her coach, Hawkins, accompany her on a bike.

“I think when you do marathon blocks and come out the other side, whether or not you’ve executed on the day, you’ve still got all that fitness, it’s just a case of recovering and building on it,” she says. “That’s why you see a lot of marathoners improving year on year…because as long as you recover well, you can take it into the next one.”

» Tuesday: Either a typical 10km session, such as  6 x 1 mile off one minute, or a midweek long run (14-16 miles at a steady pace), plus strength and conditioning. “I don’t use big weights,” says Piasecki, the focus is very much on the conditioning side.”

» Thursday: am: 20-24 miles. “This is more of a session, a staple one that most marathon runners would do, such as in-and-out-kms (1km slightly quicker than marathon pace and 1km slightly slower, no recovery). Including the warm-up and warm down you’re usually getting about 20 miles in.”
pm: Strength and conditioning.

» Saturday: Hilly run (around one hour) followed by 30min on bike.

» Sunday: 20-24 miles including around 10 miles at marathon pace in the middle.

» This article first appeared in the April issue of AW magazine, which you can buy here

Walking the tightrope of wellness

Why women-only gyms are on the rise

Who will be Kentucky’s next assistant coach? How long will John Calipari stay? Mailbag