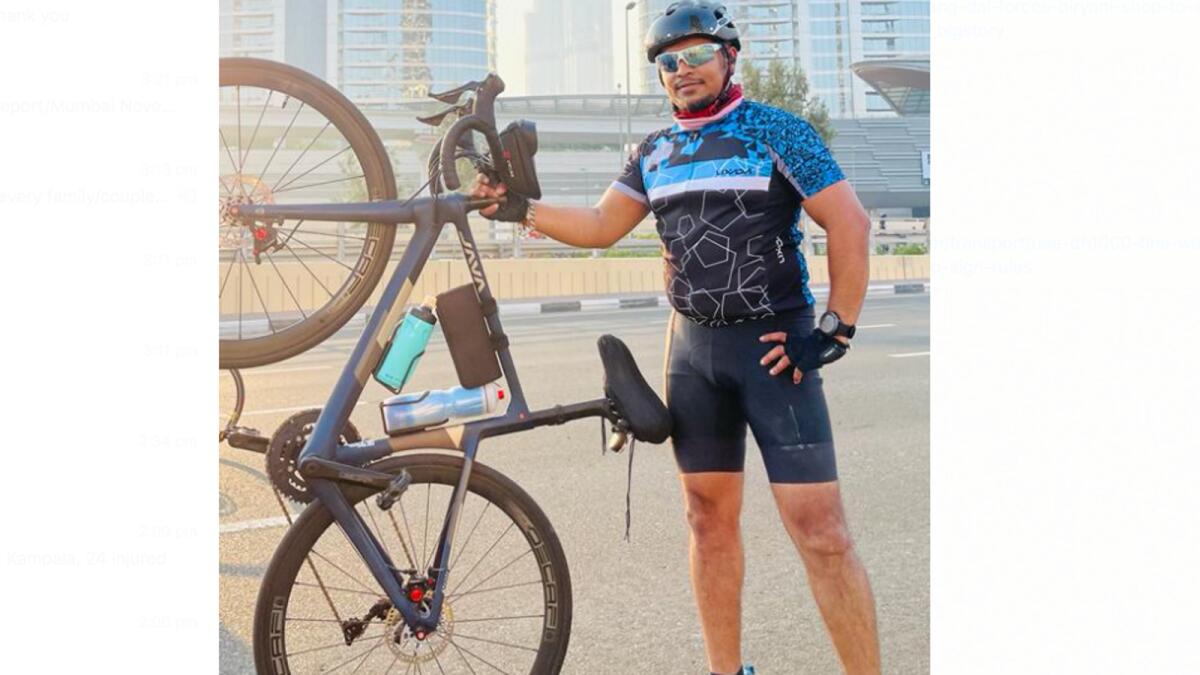 Vinoi began cycling because of his ‘hero’ – Sheikh Hamdan bin Mohammed bin Rashid Al Maktoum, Crown Prince of Dubai — who is behind getting Dubai up and running through the fitness challenge.

“Meeting Sheikh Hamdan in person is my dream. I saw in the newspaper that he cycles in Meydan and I started cycling there too in hope of of a chance encounter one day. I am certain soon my dream will come true,” says Paluparambil.”

The cycling enthusiast, who has screws in his arm and an iron rod in his leg from past sporting accidents while playing football and diving, said, “Last year 10 days before the Dubai Fitness Challenge, I bought a bike. After finishing work I used to go to either Al Khawaneej or the Meydan. I could only do 50km each day for 12 consecutive days and 100km for 18 days. However, I ended up losing 18kg in 30 days, even as I ate anything and everything that I liked.”

He said that gave him an incentive to continue with his cycling, as he loves to eat.

“I thought this is a good way of losing weight. I am a foodie and like all kinds of cuisines. The best solution is to cycle or to do some form of exercise. I don’t like the idea of dieting. So for the 2021 Dubai Fitness Challenge I decided to do 100km per day at the Meydan cycling track. I start around 8.30pm-9pm daily. I cycle for four hours. I finish cycling around 12.30am or 1. After that I come home and eat two eggs,” he revealed.

“Sometimes my knees swell up, but I use a cold pack and keep encouraging myself to continue till I reach my goal.”

His mission has made him a hero in the eyes of his seven-year-old daughter. “My daughter says ‘dad you are like superman.’ She also says she will study more if I finish the challenge.

“The first two or three 100km rounds this year were really difficult, but my wife and my daughter have been extremely supportive,” says the expat.

The multi-talented athlete who is also into different sports such as tennis, football and badminton, says, “I have received great support from members of the Muziris Cycling Club in Kerala where I participate in cycling challenges when I go home. Members of Mala Bikers Club in India and Kerala Riders in Dubai and DXB Riders have all supported me in this journey.

Some member or the other would call me to find out if I am keeping well and feeling fine. My cousin Saju Poulose Sudhi, who is an avid cycler himself, has been my chief inspiration and bulwark.

But such a challenging feat entails many impediments. Many times, the weather is a challenge, he says. “After 11pm the Meydan track becomes quite cold. It was extremely cold sometime back. At other times, it gets windy. So it becomes difficult to ride the cycle. But I keep pushing myself and tell myself that I will finish my 100km no matter what.”

Overactive bladder? Why it makes sense to drink more water – and less coffee

Researchers find how exercise protects against consequences of ageing

the benefits and importance of intuitive eating